Identif ication of the agricultural potential of soils in the Ecuadorian Amazon, from physical-chemical, microbiological and environmental variables

Agricultural productivity in the Ecuadorian Amazon is def icient due to poor soil quality caused by various pollutants. The aim of this study was to identify the agricultural potential of soils in the region of the Ecuadorian Amazon, from variable physicochemical, biological and environmental. The soil samples were taken major agroecosystems. The physicochemical variables were determined by standard techniques. Bacteria (CFU/gr) were determined by counting methodology used in plate. Environmental variables spatial (distance to populated centers) and spectral (normalized dif ference vegetation index NDVI, near infrared NIR, enhanced vegetation index EVI) variables were used for environmental description. From pH, organic carbon and relative saturation (Bases and A+H) the potential fertility indexes (IFP) were def ined. An acid pH was presented in all the soils and percentage of organic matter was lower to 2%. with an average level of A and A+H of 3.7 and 5.7 mEq 100 mL-1. Relations of Ca Mg-1, Mg K-1 and (Ca + Mg) K-1 were 7.7, 10.2 and 83.4. Signif icant direct relationship between pH and Ca and Mg, with correlation coef f icients of 0.67 and 0.80 were observed. IFP average of soil was 0.46, ranging from 0.33 to 0.65. The concentration of Cd and Pb was 0.13 and 59.35 mg kg-1. The bacteria count showed no dif ference; however, two soils showed the highest values ​ (2.64×108 and 2.13×108 UFC). 70% of areas were in agricultural-pasture land use. The lowest variation was observed in the normalized dif ference vegetation index which had an average of 0.77. The central area of the sampling area had high levels of pollutants (Al, Cd, Pb) and the zone of inf luence around these points. It is necessary to implement remediation strategies in the sampling area, to promote agricultural practices. 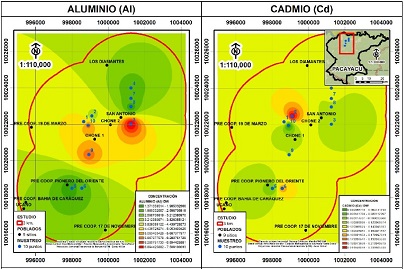