Cocoa (Theobroma cacao L.) is one of the most important agricultural crops in Ecuador; however, the production and quality of the crops is af fected by the disease “cocoa moniliasis”, caused by the fungus Moniliophthora roreri. Currently, this pathogen is considered the main limiting factor for cocoa production in the country. In this study, the ecological niche of the cultivation of T. cacao and M. roreri was evaluated to identify the possible changes in the potential geographic distributions and in the areas of crop-pathogen coexistence in the face of climate change scenarios. For this, records of the presence of M. roreri and T. cacao were collected from national and international databases. Fif teen bioclimatic variables of worldclim 1.4 for the present and future were selected, and the algorithm of maximum entropy MaxEnt to obtain the models. The areas where cocoa and the phytopathogen are potentially distributed are the coastal and Amazon regions of the country at present. The transfer of models in the RCP 4.5 and RCP 8.5 scenarios for the year 2050, predicted the expansion of areas suitable for cocoa, especially in the south of the country, by 16% and 18%, respectively. On the contrary, for the phytopathogen, the model predicts a 5% decrease in suitability in the same future scenarios in the Ecuadorian Amazon region. The areas susceptible to the invasion of the fungus and coexistence with cocoa coincide and are located mainly in the Ecuadorian coast and Amazon for the present and future scenarios, representing a risk for cocoa cultivation. For this reason, it is suggested to adopt early warning measures for the detection and control of the disease, focused on these risk areas for the conservation of biodiversity and food security in the country. 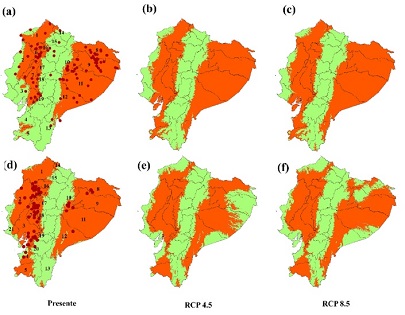