The formation of soils from hardened layers of volcanic origin -tepetates- broken, depends on the management system that is used to enable it to be implemented for agricultural or livestock use, so the development of models that allow understanding the transformation of structural units, from fragments to aggregates, is of great importance. From this perspective, the present work proposes and justifies the use of a kinetic model of order n, to model the distribution of mass and organic carbon in the structural units of tepetates under cultivation and predict their evolution towards soil formation. The validation of the model and the proposed relationships were carried out from the comparison of the dynamics of structuring in tepetate, with different case studies, which include substrates with different characteristics, such as soils, degraded soil and loamy marl. The modeling results were highly favorable (R2 > 0.98). The temporal evolution of the cementing agent in the substrates -organic carbon- as well as structural stability, according to the proposed model define patterns that are directly associated with the evolution of soil formation with the level of aggregation. In short-term experiments (≤ 2 years), the analyses highlight the participation of other agents, in addition to organic carbon, that control the mechanisms of aggregation, so an extension of the proposed model was reviewed, to consider this scenario. 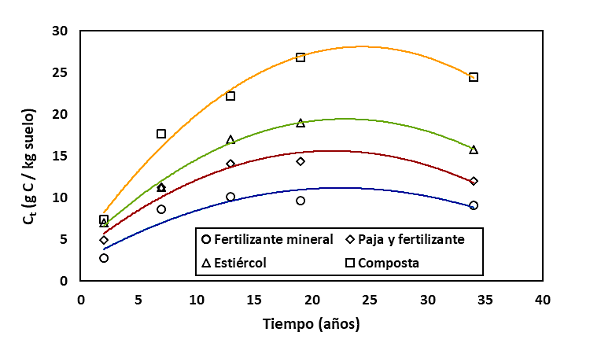