Ecuador is a privileged country due to their geographical and climatic conditions, which allow it to be one of the largest producers of f ine cocoa and aroma on a global scale. One of the most important limitations for its cultivation are fungal diseases, such as the pernicious phytopathogen Moniliophthora perniciosa, which causes large losses in cocoa production. This research aimed to assess the risk of cocoa in the face of potential geographical distribution changes of M. perniciosa under climate change scenarios in continental Ecuador. Pathogen presence data were obtained from the scientif ic literature and Niche Toolbox, and with bioclimatic variables, selected according to their ecology, and potential distribution was modeled with MaxEnt. With binary maps of the phytopathogen and the land use layer for cocoa cultivation, the sites where both species coincide spatially were determined. Model of M. perniciosa was transferred to continental Ecuador at present and to dif ferent climate change scenarios. The pathogen range was purchased between current and future scenarios to identify losses, extensions and stability. The highest range of expansion and contraction occurs in the extreme stage RCP 8.5 2070, with 10 392 km2 and 540 km2 respectively. There is a greater stability range during future scenarios RCP 4.5 2050 with 30 929 km2 and 2070 with 30 908 km2. Currently, phytopathogen is potentially distributed in 74% of the area occupied by cocoa plantations and in the future all scenarios indicate an increase. Prevention, management, and control measures must be increased to keep cocoa production stable and not af fect the economy at the national level, nor of the families of producers. 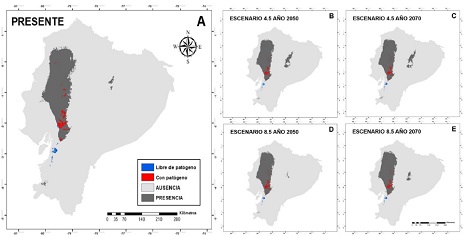